Another year of Daylight Savings Time (DST) is coming to an end and with it, the joy of an extra hour to sleep or celebrate.

It used to give me nightmares.

For a time, I managed an Excel file that tracked a production schedule.  Operators entered in start times and the spreadsheet calculated when the process should end.  This was very time-sensitive.  Ending the process early caused significant operational issues.  Delays led to lost production.  Spreadsheets aren’t a great application for this, but 99.9% of the time we had no issues.

The 0.1% we did, DST was usually involved, which meant more than a few late nights of scrambling to get things right.

While the concept of shifting time twice a year is easy to understand, it’s really freaking hard to account for the two hours out of 8760 per year that act differently.  To the programmers make this a seamless change every time, I salute you!  In honor of their brilliance and of humanity’s tendency to make things unnecessarily complicated, here is a brief history of DST with a touch of astronomy to explain why we mess with our clocks twice a year.

DST started off as a joke by Benjamin Franklin no less.  In 1784, his anonymous letter to Journal de Paris quipped that the French could save ~$200 million a year spent on candles if they only rose with the sun and retired at sundown.  And with so much at stake, forcing citizens to comply only made sense!  His suggestions?

Alas, his brainchild would have to wait.

While Franklin’s cheeky missive was ignored, George Hudson, a New Zealand entomologist, renewed the cause with papers in 1895 and 1898 that proposed a 2-hour shift forward on March 1st and back on October 1st to make better use of daylight.  This would also have conveniently supported his prodigious bug collecting interests!  In 1907, Englishman William Willett published “The Waste of Daylight” that suggested a 20-minute shift on four consecutive weekends in April and September with similar effect.  His persistent campaign eventually led Parliament to review a “Daylight Saving Bill” in 1908.   It was initially mocked, but with some tweaks gained substantial support over the next few years, though not enough to become law.

That changed during World War I when Germany implemented sommerzeit or “summer time”, on April 30, 1916 in an effort to conserve coal.  England followed suit shortly after on May 17th.  The U.S. waited until March 31st, 1918, though its DST trial was short-lived nationally.  Congress shut it down in October 1919 overriding President Woodrow Wilson’s veto in the process.  However, DST lived on locally as some communities enjoyed the summer shift.  By 1923, nearly 500 cities were in the DST camp.

The U.S. once again enacted year-round DST in 1942 during World War II, which united the nation’s time-changing ways, only to have them shut down again in 1945 at the end of the war.  However, some states and cities continued to do their own thing for the next 20 years until the Department of Transportation got involved. Cross-country travel was gaining popularity and industries had a tough time keeping track of the mishmash of time changes throughout the country.  The Uniform Time Act of 1966 forced states to adopt standard time or DST.  Cities could no longer go rogue either, though the entire state could opt out of DST should they choose, which Arizona and Michigan did.  Michigan opted back in to DST in 1972 while Arizona continues to go without as does Hawaii.

Globally, DST is all over the place.  178 countries currently don’t observe it.  Of those, about 100 never have while the rest did at one point, but gave it up.  The other 70 or so countries had a similarly tumultuous journey as the U.S. and ended up opting for the twice annual hourly shift.  Wikipedia summarizes it nicely by country as does this map below: 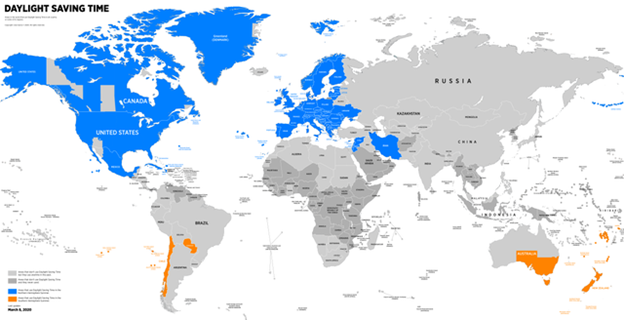 In the Northern hemisphere, Mexico, the U.S., Canada, a few Middle Eastern countries, and a smattering of island nations observe DST.  Most of Europe currently uses DST, however that will be changing as soon as 2021.  The European Parliament voted to end the seasonal time change leaving each country to decide its standard time, though the Council of the European Union has yet to finalize its decision.

The Southern hemisphere has a much sparser adherence with Chile and Paraguay in South America, New Zealand, some more island nations, and about a third of Australia, which is worth a deeper look:

The 90-minute shift from Western to central Australia is odd enough, but it gets downright ridiculous during daylight savings.

As you can see from the map, geography, specifically latitude, plays a significant role in what countries practice DST.  That’s because of a little thing astronomers call obliquity.  Also known as axial tilt, the Earth spins on its axis at a different angle than it orbits the sun.  Written descriptions of this are tough.

The rear tires spin about their axis perpendicular to the road.  They also “orbit” around the center of the donut, parallel to the road.  This corresponds to an axial tilt of 90°.

When the North pole leans toward the sun, the Northern hemisphere experiences summer and longer days.  On the other end of the orbit, the North Pole tilts away from the sun leading to winter and shorter days.  The variability in daylight hours becomes more extreme the further away from the equator.  Note below how the Antarctic Circle is shielded from the sun during the June solstice (left) and the Arctic Circle is in darkness during the December solstice (right).

For a practical comparison, look at the times for sunrise and sundown for Quito, Ecuador and Reykjavik, Iceland over the course of a year.  Quito, near the equator (latitude 0° 10’ S), remains nearly constant at ~12 hours of daylight while Reykjavik (latitude 64° 08’ N) goes from 4-hour days to 3-hour nights and back every year.

Cities near the equator see almost no variation in daylight hours.  In Quito, sundown varies between 6:01pm and 6:31pm and sunrise varies between 5:58am and 6:24am.  DST would only serve to throw a wrench into a perfectly stable day!  On the other hand, Reykjavik is so far away from the equator that days and nights get REALLY long.  DST would move sundown from midnight to 1am on the summer solstice.  If the lack nighttime didn’t mess you up, the hour shift would do the trick!

Daylight Savings Time continues to be an oddity of mankind.  Its satirical beginning from an American statesman advocating wake-up calls with artillery fire only adds to its colorful history.  In a hundred years it may be nothing but a distant memory.  Until then, some of us will keep on springing forward and falling back.

I’m just thankful I don’t have to program my phone to do the same.

Thanks Muhammed, Kyla, and Jeremiah for feedback on the drafts!

And Compound Writing for the forum to meet these fascinating people.