How many piano tuners are there in Chicago?

How many quarters would you need to stack to be as tall as the Empire State Building?

If all digital data were stored on punch cards, how big would Google’s data warehouse be?

These questions are nearly impossible to answer accurately without extensive research.  Enrico Fermi, 1938 Nobel Laureate and nuclear power forefather, was known for accurately estimating similarly hard-to-know answers with next to no information and posing similar questions.  Most famously, he estimated the power of a nuclear blast by dropping bits of paper as the shockwave passed and then measuring how far they blew away.  His estimate of 10 kilotons was amazingly close to the official U.S. Department of Energy 21-kiloton yield determined 50 years later using gamma-ray spectroscopy, whatever that is.  His crude measurement led to a reasonable estimate within minutes.  The actual answer took decades to determine.

Using Fermi’s technique of applying known concepts and quantities, we too can develop strategies to estimate hard-to-know answers with little effort and decent accuracy.  In short, turn a random, nonsensical wild-ass guess into a scientific wild-ass guess or SWAG.

Munching on a chocolate creme Oreo the other day, I noticed a reversed wafer and wondered about Mondelēz’s quality control process.  I also pondered how many Oreos are manufactured in the U.S. every year.  For kicks, instead of Googling the answer right away, I opted to estimate it first, a la Fermi, and then see how I did.

First:  Population of the U.S.

How did I do?  Well, somewhere between horrific and abysmal.

It turns out, the U.S. Oreo production is not readily available, at least where I was looking.

Mondelēz touts a worldwide Oreo production of over 40 billion per year and net revenue of $3.1 billion in 2019.  That’s about 7.8 cents per Oreo.

With the net revenue per cookie, we can estimate U.S. consumption with sales numbers:

Some sites took a direct route and just estimated consumption:

Combining these results, estimates range from 3 to 32 billion Oreos per year.  However, the 2007 and 2015 results seem to be oddballs compared to the other four.  Our range narrows considerably to 6 to 9.6 billion per year once we throw those out.  But now we’re stuck.  Without official U.S. production data, there is no great way to narrow the range further.

All said, I’ll go with 8 billion Oreos per year and call it a day. 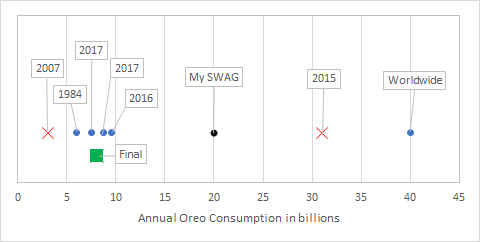 Two things I found useful from this exploration:

I had no idea how Oreos Americans eat annually.  Before this, if someone asked me how many million are consumed annually, I would assume the number must be between 1 and 1000.  In the best case, I’m off by a factor of 10!  It turns out, my SWAG was bad, but not that bad.

For more extreme examples, try these questions out:

Messes with your head, doesn’t it?

Using “thousands” or “billions” frames the answer between 1 and 1000 when the right answer is either much smaller or much larger.  It is surprisingly persuasive, especially without prior knowledge.

My SWAG took about two minutes to build.  The “close enough” result took about three hours of trawling through 10-K forms, press releases, and obscure blog posts to determine.

It took me 100 times longer to find a slightly more accurate answer.

For the sole purpose of satisfying a curiosity, that can be hard to justify.  Spending more time makes sense when accuracy is valuable, be it marketing or physics.

Well, that was fun!  Now you’ll have to excuse me.  I have a tall glass of milk and a stack of Double Stufs to attend to.

For more Fermi questions, check out these links:

Many thanks to Stew, Joel, Chris, Jesse, and Dan for your feedback. It really leveled-up this post!

Compound Writing is making me better.